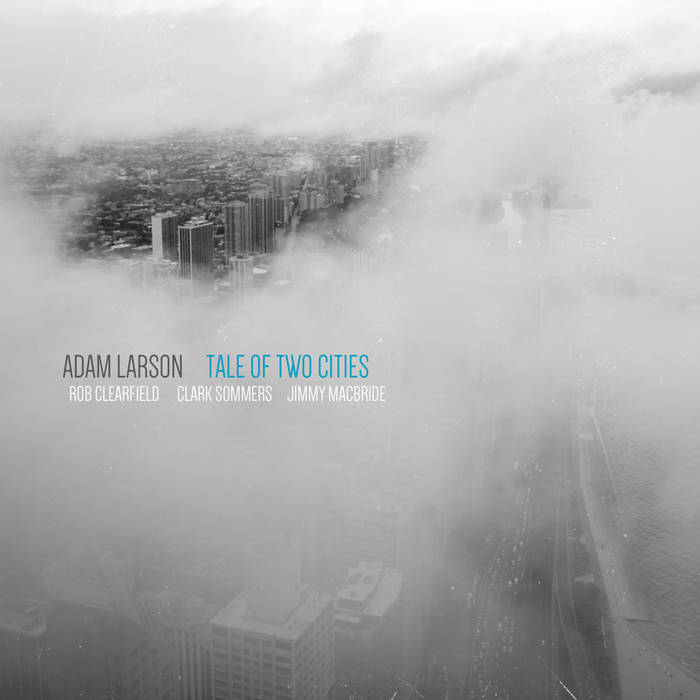 The New York Times has called Adam Larson “the sort of jazz musician who gets flagged early on as a promising talent and then hustles to meet every requirement for success,” while Downbeat magazine called the tenor saxophonist’s 2015 release Selective Amnesia “an impressive album that not only expresses his sense of a newfound personal freedom but also showcases his compositional prowess for lyricism.”  Now, with his latest release, Second City—his fourth release as a leader and second for Inner City Music—Larson is taking his music to the next level with eight diverse, scintillating tracks, all but one of them (Nirvana’s “Smells Like Teen Spirit”) new original compositions. Joining Larson on the quartet recording are Rob Clearfield (piano, Rhodes and Wurlitzer), Clark Sommers (bass) and Jimmy Macbride (drums). Together they display an innate intuitiveness that is rare even among ensembles that have worked the jazz circuit together for many more years. The album was recorded at Electrical Audio in Chicago, a.k.a. The Second City, in March of 2017, hence its title.

“The thought process behind Second City,” writes Larson in the album’s liner notes, “was to document the group of musicians I find myself playing with most often as I travel to the Midwest, which is where I have my roots…As usual, my compositional process reflects different events throughout my life,” he adds, and even an initial listen reveals the personal, intimate nature of the songwriting and the musicians’ single-mindedness in realizing Larson’s concepts.

“Who Even is That?,” the opening track, was inspired by Larson’s awe at the ever-changing New York jazz scene that he has witnessed during the decade he’s lived in the city. “There will always be a new group of great musicians coming each year to fulfill the same dreams and desires that so many, including myself, set out to achieve,” he says in the liner notes.

One of the life events that Larson refers to in his comments was the birth of his son. Although Jack is still an infant, Larson says that the next track, “Out the Window,” was written “with” Jack. Sitting at the piano in the family’s apartment, Adam writes, the boy “was so eager to place his hands on the keyboard that he lunged toward the instrument and laid down some great chords.”

“First Step,” the next track, was written for another couple’s baby but inspired by the music of New Orleans. The album’s sole cover, the Nirvana classic written by the late Kurt Cobain, is up next. For a long time, Larson confesses, he thought it was actually composed by the jazz-rock trio The Bad Plus, who also performed a killer cover of the tune. “Sleep Now” then returns us to Jack, this time with a lullaby.  “Perpetuity” and “Uphill Climb” provide two of the most dynamic performances of the set. The back-to-back tunes, while markedly different in mood and texture, allow all four musicians to display their virtuosic chops individually and to coalesce most effectively as a unit. On the former track, Larson looked no further than the headlines, noting that the present political drama, “whether you like what’s going on or not…won’t last forever.”

With “Uphill Climb,” Larson addresses the challenges of finding work as a freelance musician, an increasingly difficult task in a climate where creativity now seems to be undervalued. He calls the tune “an ode to the haters” yet there is nothing about it that suggests frustration or vengeance or any of the other emotions that often fuel hatred. On the contrary, there is a beauty to the closeness that the playing suggests, a feeling that despite the many obstacles one might encounter in attempting to achieve a goal, the art itself will always find a way toward expression.   Finally, there’s “Breakout,” which Larson calls a “tour de force” featuring great “saxophone gymnastics.”

The music on Second City, drawn to the surface by a mega-talented young composer and instrumentalist and his colleagues, will likely have a different impact on all who hear it, but the most important thing is that it speaks to each of us directly—this is not music that simply plays in the background without being noticed.  As the Chicago Tribune has written, Adam Larson is “a player for whom the word prodigious was coined.” Where he might go from here is anyone’s guess, but for now we can just be glad that he’s here, creating music of such substance, grace and depth.- Jeff Tamarkin

Who Even is that?
Out The Window
First Step
Smells Like Teen Spirit- Grohl, Novoselic and Cobain
Sleep Now
Perpetuity
Uphill Climb
Breakout

Bandcamp Daily  your guide to the world of Bandcamp